On Tuesday 21st October, The Charity Dreamgirls celebrated 8 years with another unique, musical extravaganza. This year in tribute to #Beatlemania – the Charity Dreamgirls team, researched the special year of 1964 & events that saw the band become the worlds most renowned group.

With very special thanks to The Holdsworth House Hotel, the venue where The Beatles stayed in 1964 & celebrated John Lennon’s birthday – the very same bedrooms, furniture & artifacts where assembled together for the first time since that period and guests of The Beatles Afternoon Tea were able to enjoy a very special trip down memory lane (Or should that be Penny Lane?) 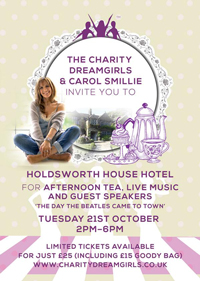 With thanks to The Beatles Revolution, Holdsworth House Hotel, Sam Dunkley, Bruce Fitzgerald Pictures, The Halifax Courier, L’Oreal, House of Fraser, Layla May Clothing, Kate Rusby, The Bradford Bulls, Harvey’s of Halifax, The Cast of Let It Be, Kay Mellor, Cardelium, Sleigh & Story, Mr. Paul Buckley – and of course all of our Charity Dreamgirls team – here is what our chosen charity – Simon On The Streets – had to say:-

“The Charity Dreamgirls selected to support Simon on The Streets with their 8th year of events & a special Beatles Afternoon Tea. Kate Hardcastle & The Charity Dreamgirls team dedicated hard work to the event and with the media created unique stories that included our charity & gained mentions in the local press, videos & social media which benefitted by an increased number of twitter followers & interest in the charity. As an independent charity, this awareness raising is vital for us to build our connections as well as get the message out there about what we do. We would definitely recommend that other small charities partner with Charity Dreamgirls as it will be of great benefit to them. Additionally £500 was raised at the event, which with further activities over the month – we hope will reach £1000 as further donations come in; which is just fantastic.”